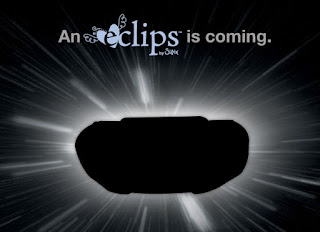 Hey readers - it's that time again. CHA Winter 2010 begins in a few weeks out in California, and I'm looking forward to collecting updates on all the new papercrafting tools, especially die-cutting systems, stamps and dies.

So far there are two new products I want to point out - Tim Holtz Alternations, a collaboration with Sizzix & the Sizzix eClips - which seems to be a digital device of some variety. The Tim Holtz/Sizzix product line is going to include a new machine as well as dies. 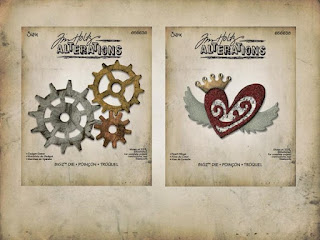 I'm wondering if this will just be another branded version of the Big Shot, or a totally new style of machine? The sneak peek pic of the eClips makes it nearly impossible to tell what it's meant to be. It sort of looks like a Gypsy, but that would mean Sizzix would need a digital die-cutting machine as well.  Again, more questions than answers. BTW - what ever happened to the Big Shot Pro? :)

No pics yet - but something to think about.

For more on die-cutting machines and how they work, please visit my Die-Cutting Tutorial, which explains the current variety of available machines.

And check out my past posts on CHA here.
Posted by Aimee on December 22, 2009 No comments:

Email ThisBlogThis!Share to TwitterShare to FacebookShare to Pinterest
Labels: cha 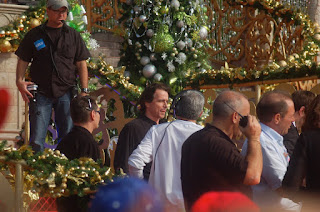 Yanni preparing for the taping
For many years I've watched the Disney Christmas parade on TV, and always thought it would be fun to go on Christmas Day and see the parade! It really wasn't until recently that I learned that the parade itself is actually filmed several weeks prior to Christmas. Knowing this, I've been paying attention to Disney-themed blogs and tweets, looking for tips on how to get into the filming.

If you already have some sort of ticket (annual pass, etc), then it's just a matter of learning when the filming days are. However, keep your eyes open, because once filming passes become available, you might be able to get in for special filming events. The filming e-tickets also include free park admission and free parking, which turned out to be a great deal for us. We attended the tapings on Thursday, December 3rd and Sunday, December 6th. Although we had special e-tickets for the Thursday event, we found that anyone in the park could participate in the taping. The same was true on Sunday.

You will not usually have any idea who you are going to see. A few days prior to filming, we learned that Celine Dion and Kris Allen would be performing, as well as possibly Miley Cyrus. We also learned that Jonas Bros. were definitely NOT perforing. As it turned out, this was not accurate. Although Celine did perform, it was on a different day and venue due to rain. Miley Cyrus didn't perform at all, and the Jonas Brothers did in fact show up on Sunday. So you never know!

On Thursday we were able to see the Yanni Voices performance and promos taped by Nick Cannon. Kris Allen (American Idol) also performed that day but we were exhausted from watching the Yanni taping and had decided to take a break and missed Kris Allen completely.

The Yanni Voices performace was great. They performed one song, "Oh Holy Night." Their arrangement of this song was wonderful. I've heard so many versions of "Oh Holy Night," and theirs is my new favorite. It's available on iTunes, so go get it y'all!

I also learned that these performances are NOT lip-synched. We watched various performers over two days of taping, and nothing was lip synched. I've always wondered about that, and now I know.

Sunday we went back for a second round of taping, and saw Kelly Ripa, the float portions of the parade, Steve Rushton & the Santa Buddies, and the Stryker Dance team. Stupidly, I left my camera battery in the car, and after recovering from that boneheaded mistake I decided just to buy a disposable. If you've been to Disney, you know that retrieving something from your vehicle is likely to take an hour and a half, so I decided to be safe and just purchase the disposable. Unfortunately, the quality and quantity of the photographs I took is seriously diminished, but at least I have some record of the events.

If you decide to go next year, take note of my tips below:

DON'T FORGET TO LOOK FOR US ON THE ABC DISNEY PARKS PARADE ON DECEMBER 25th! 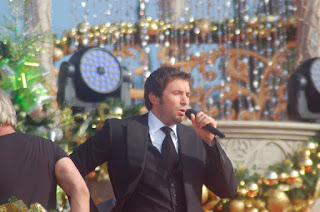 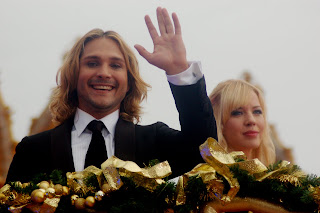 Ender Thomas & Leslie Mills (Yanni Voices) before taping. How cute is he? Seriously. My daughter has a serious crush now. 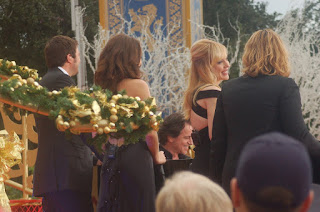 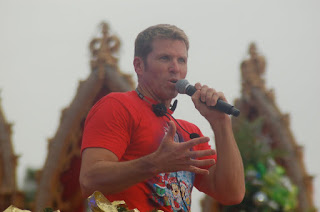 Longtime Disney Parks entertainer Billy Flanagan. He was so funny, the perfect host. Provided great directions to the crowd and served as a stand-in for the talent during the crowd shots. 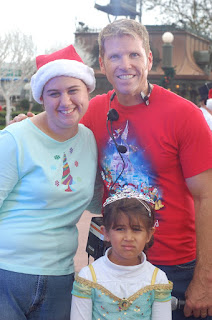 My children with Billy, as you can see, Olivia is done with this whole thing. 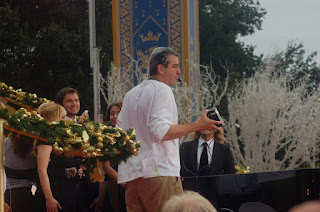 The "truck" (aka director) 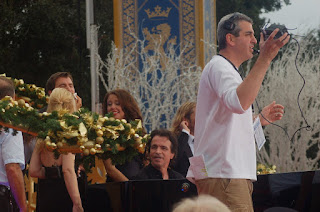 Preparing for next shot with Yanni. 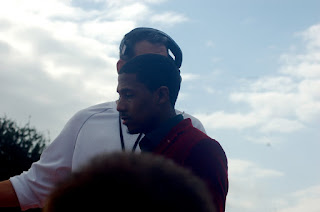 My pics of Nick Cannon are terrible. I was shooting directly into the sun. 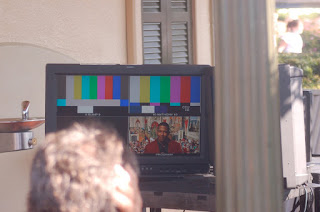 Seeing what the shots actually look like on the monitor 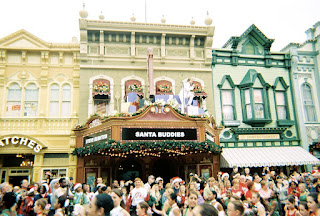 This is from Sunday, Steve Rushton performs on top of the Main Street Cinema. 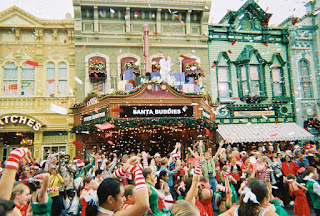 Another pic of Steve Rushton and the dancers 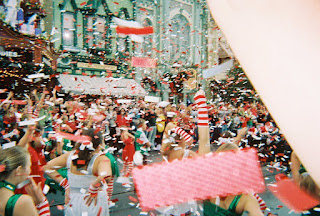 Final "take" of the Santa Buddies shot. Confetti only goes off during the last take. In between takes, the street cleaners come out and clean all debris. 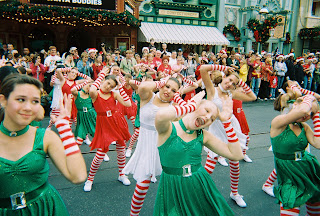 The  dancers were incredible. The young lady front and center is from Mississippi, probably has a career as an entertainer! 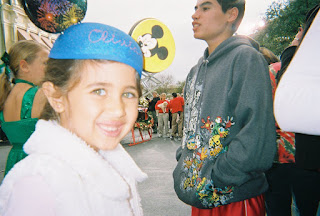 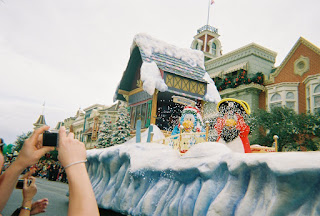 The Club Disney Penguins. I giggled when the director kept shouting at them to face forward! 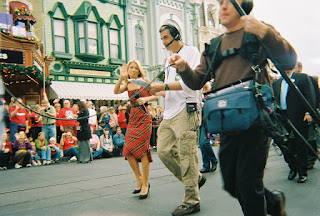 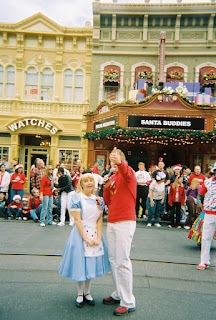 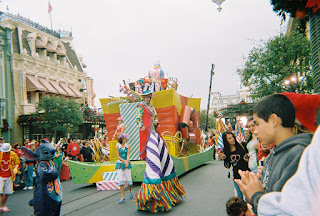 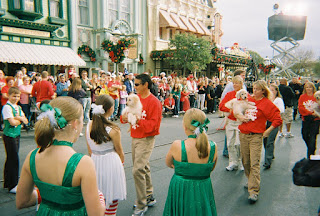 The Santa Buddies (so cute, it's unbelievable) 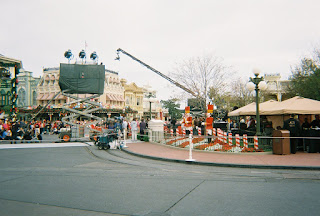 All the production equipment on Main Street
For more pics please visit my Flickr Photostream.
Posted by Aimee on December 07, 2009 No comments:

Operation Write Home (OWH) is an organization that coordinates the efforts of cardmakers all over the country in supplying our troops overseas with handmade cards that these heroes can send to their loved ones back home.  I've been a big fan since I became aware of them during the last blog hop, and I'm so excited that to be participating in the Veteran's Day Blog Hop! For more information on OWH, and to learn how to send your own cards, please visit their very comprehensive site.

If you need to go back to the beginning of the hop - click here to get started. Make sure you stop back here! :) 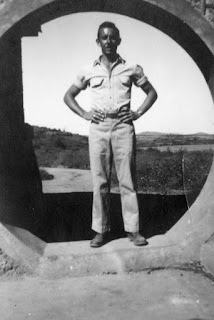 My grandfather Bruce was a veteran of World War II, serving as a pilot in the US Army-Air Corps. He flew over China, India and all through Europe. One of his planes malfunctioned while flying over Burma, and he was forced to parachute from his plane. Just before landing, his parachute was caught in some tree limbs, leaving him hanging in the trees. This proved to be quite lucky, as some tigers below circled him for several hours before help arrived. He went on to be a mechanic for Eastern Airlines, after declining an offer to become a mechanic for Air Force One. After retiring, he became an avid cardmaker himself! His specialty was calligraphy, and he made gorgeous cards that were sent to family and friends. Because he actually gave away most of what he made, I have very few examples - but I love that we have this in common.

Take a look at my post from yesterday, with some pics of the Veteran's Day celebration we attended at Florida National Cemetary. My grandmother and grandfather were interred here in September.

Here are my two cards, a simple thank you for my AnyHero card, and a fun little Valentine for a hero to send home! My photography seems to be getting worse and worse, rather than better - sorry about the pics. The thank you card uses a little Studio G Christmas wreath stamp that I colored blue and red Smooch -- making it a patriotic/thank you/Christmas card, LOL!  The froggy set in the second card is a retired Stampin' Up! set. All papers are Sassafras Lass. 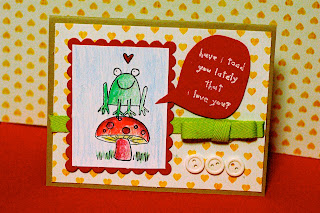 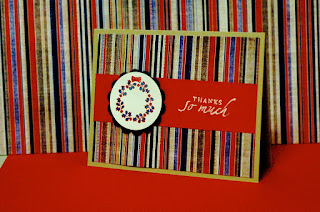 NEXT STOP: Anita at http://cardsandcoffee.blogspot.com
Posted by Aimee on November 14, 2009 55 comments: 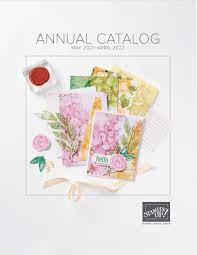 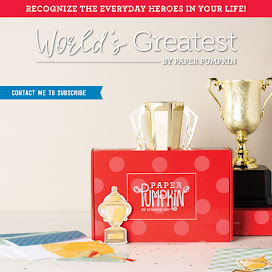 Shop with the Krewe! 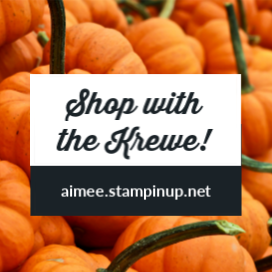 Click the image to go directly to my online store

Promote Your Page Too